Dolores Huerta: ‘We Have to Keep on Marching’ 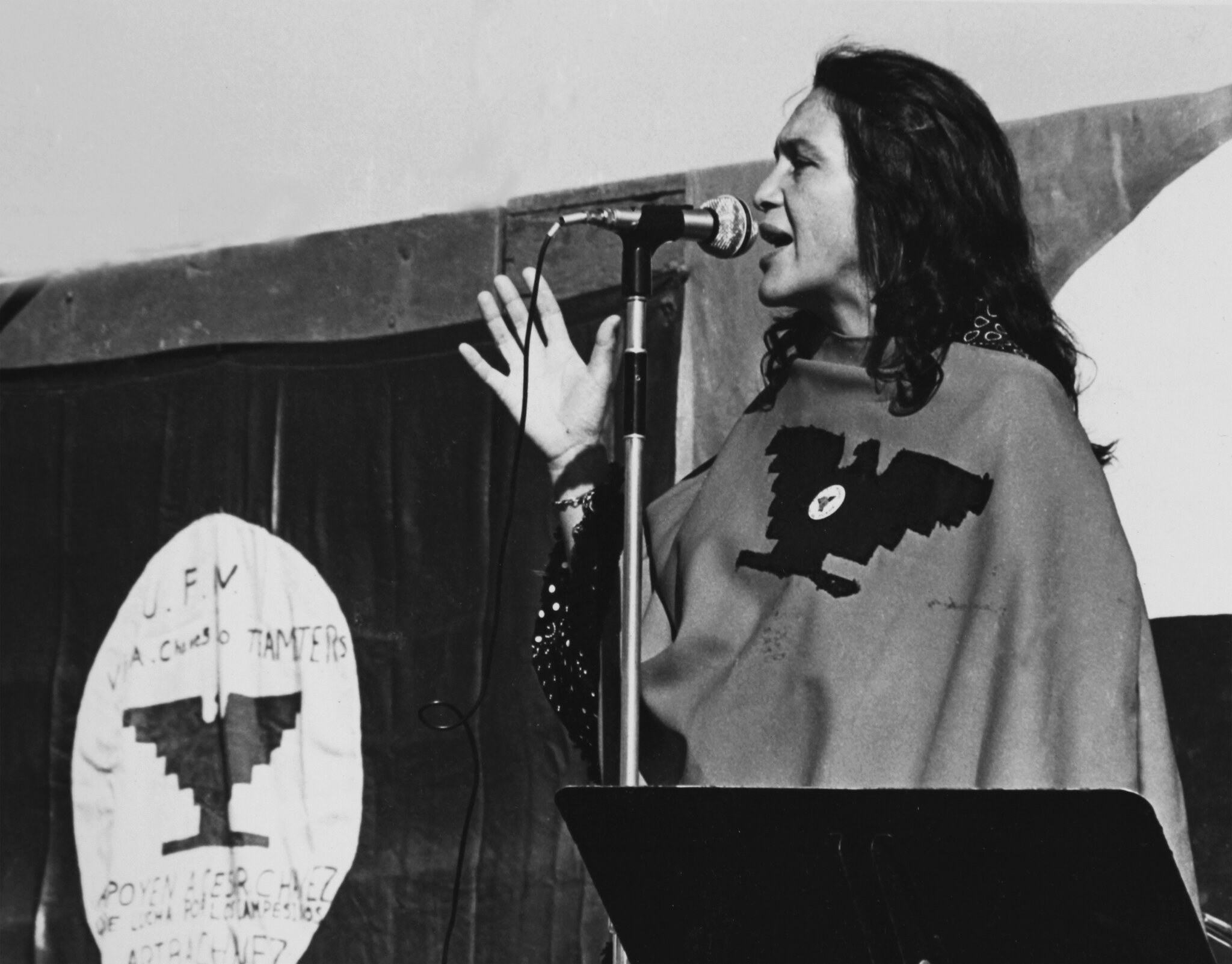 Dolores Huerta: ‘We Have to Keep on Marching’

Fifty years after a historic victory for farm workers in California, the civil rights leader feels optimistic about the new generation of activists.

By Carlos Andres López
Mr. López is a writer in New Mexico.

Dolores Huerta on stage at a United Farm Workers rally in California, circa 1975 or 1976.Credit…Cathy Murphy/Getty Images

This is an article from World Review: The State of Democracy, a special section that examines global policy and affairs through the perspectives of thought leaders and commentators, and is published in conjunction with the annual Athens Democracy Forum.

When she was in her 20s, Dolores Huerta witnessed the aftermath of the “Bloody Christmas” attacks in Los Angeles in 1951, in which more than four dozen police officers beat seven young men in their custody, five of whom were Mexican-American. This and other instances of police brutality against people of color — she was herself assaulted by police in 1988 at a protest in San Francisco — in part propelled Ms. Huerta, 90, into a life of activism.

The images of Black men and women beaten or killed at the hands of police today, like the images of the Los Angeles episode so many decades ago, are reminders of a seemingly intractable problem in America. “I think the whole policing problem needs to be solved because the police have been militarized,” Ms. Huerta said in a recent interview. “They are being trained like soldiers, trained to kill, and that’s what they’re doing. That’s crazy.”

Ms. Huerta is nevertheless optimistic that recent demonstrations and grass-roots efforts will lead to change. She has seen it happen before: It has been 50 years since the California grape strike resulted in a resounding victory for farm workers’ rights and became a flash point for racial and economic justice in the nation. Ms. Huerta, along with the labor activist César Chávez, was at the center of that campaign, organizing a yearslong boycott of California table grapes and wine that eventually drew support from millions of people in the United States and other countries.

Her words, “Sí, se puede” (“Yes, we can”), became a slogan for a movement that ultimately shielded farm workers from exploitative labor practices and won them fairer wages as well as collective bargaining rights.

Born in New Mexico and raised in California, Ms. Huerta ascended to the forefront of the American labor movement in the 1960s alongside Mr. Chávez. In 1962, they formed the National Farm Workers Association — today known as the United Farm Workers — to advance the economic welfare of farm laborers. As the U.F.W. made strides through boycotts, strikes and marches, Ms. Huerta became one of the most vocal leaders of what she described as a cultural revolution for farm workers. She also stood out as the only woman leading a movement dominated by men. 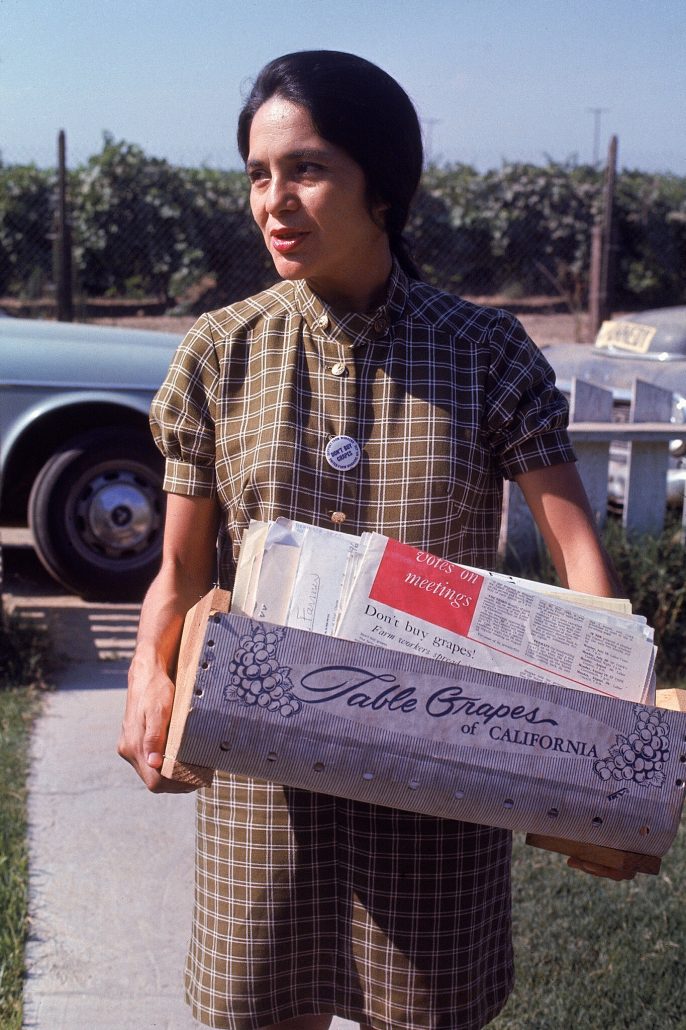 Today, Ms. Huerta continues to advocate on behalf of Latino and farm-working communities as the president of the Dolores Huerta Foundation, which she founded in 2002, two years after her departure from the U.F.W.

We spoke to Ms. Huerta about today’s social movements, gender equality and her views on the state of American democracy. The interview has been edited for length and clarity.

Senator Kamala Harris, who you are close to, is on the Democratic ticket with Joe Biden. Do you think this is the year that a woman will be elected vice president?

I certainly do. It’s going to be challenging because of Covid-19, and we know that there’s a lot of voter suppression going on, but we hope that people can overcome those suppressive tactics, and vote. I think if everybody votes, that definitely Kamala Harris will be the first woman vice president elected in the United States.

How do you feel about the state of the country right now?

The pandemic has hit us very, very hard. At the same time, it has highlighted so many of the issues that we have had with us for so many decades: racism, income inequality, the way women are treated, our educational system — which we know is lacking — our judicial system, our criminal justice system. It’s really spotlighted a lot of the deficits that we have in our society and the things that need to be addressed.

But young people are the ones out there pushing the envelope right now with the Black Lives Matter marches. And it’s not just Black and brown people. I think that’s really, really promising for the country.

Throughout your life, in addition to your work with the labor movement, you’ve advocated to increase the number of women in positions of power. What are your thoughts on the progress that America has made with regard to gender equality?

I would say that women, like the Black Lives Matter movement, have been pushing the envelope with the #MeToo movement — and we see progress. Some 25 percent of the U.S. Congress is now women. In some states, like Nevada, women are a majority in the state legislature. In California, I think we have like 38 women. So we do see that there’s a lot of progress.

But considering that we’re commemorating 100 years of women’s right to vote this year and we’re still not at parity, we have to keep pushing until we get to 50 percent. There are some places like Iceland that have mandated that a certain percentage of legislators be women; we in the United States are still behind in terms of getting women in political leadership. And look at the corporate world — it’s abysmal. We need to have equal numbers of women, not only in government offices, but in public agencies and, of course, in the corporate and commercial world. And I like to say this: If you do not have equal numbers of women on a board when decisions are being made, it’s going to make the wrong decisions.

You once said that, “the history of the world has always been made by mass movements of the people.” That, of course, resonates today with the Black Lives Matter movement, because demonstrations against police brutality have taken place not only here in the United States, but all over the world. And that made me think of the grape boycott in California. What is it about movements like these that make them transcend borders?

In the women’s suffrage movement, they marched and marched. Marching and protesting are important. But I like to say to people who are protesting and marching that until you put something into a law that can be implemented, that can be enforced and where people can be held accountable, we have to keep on marching right to the ballot box. We have to elect progressive people to our different public offices. Whether it’s the Congress, the presidency, our state legislature, our city council, or our local school boards.

In your work in civil rights, you organized ordinary people and overcame monumental odds. What sort of advice would you give to young activists who are fighting for justice in the United States, or for democracy and human rights in places like Belarus or Hong Kong?

You said the word democracy — this is it. A democracy is an active sport. If the football players don’t show up for the game, you don’t have a football game. Democracy is the same thing, if you don’t show up in terms of voting. And we have to go further than that because we know that a lot of people are not engaged.

We have to say to all the young people out there: You’ve got to get engaged, you’ve got to organize. The way that you’ve organized for these marches, organize for voting.

When people are organized, they can get information. They can act collectively. People are so much better informed when they belong to an organization. And that’s why unions are a critical part of the foundation of our democracy.

You have often called for comprehensive immigration reform in the United States. What does an ideal immigration system look like?

We have passed legalization programs about every 20 years. Now we’re behind — the last immigration reform bill we had was in 1986. And it’s time we just had another legalization program, basically, and to stop deporting people. Here in the Central Valley of California, the Trump administration has deported so many farm workers, yet they want to bring in farm workers under another umbrella program called the H2-A program. So, of course, if they come under the H2-A program, they don’t have any rights. They can’t organize into a union. They can’t vote. And the way that some of these H2-A workers are housed and treated, they don’t even know that we have labor laws in the state of California. It’s hypocrisy because while they’re doing this, the administration is deporting the undocumented people that have been here, many of them for 20, 30 years. They have families here, they have children here. 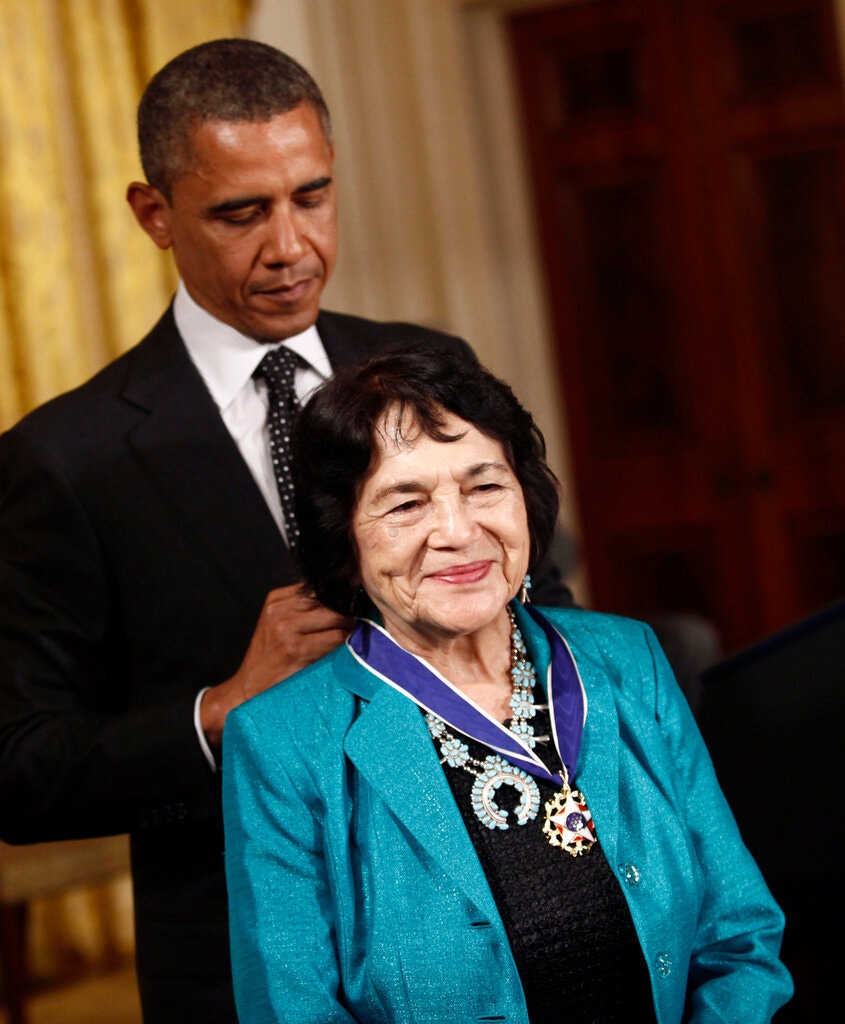 Ms. Huerta receiving the Presidential Medal of Freedom in 2012. Credit…Luke Sharrett for The New York Times

How do we combat anti-immigrant views in this country?

I think, again, with knowledge and information. Undocumented immigrants contribute billions of dollars to our Social Security system that they themselves will never be able to collect. They contribute with their spending, and they contribute with the sweat of their labor. They contribute the food that we get on our tables every day. So many undocumented immigrants are working in construction, and in the service industry, in the health care industry, in the child care industry — so many of these people are undocumented. So they’re already here. Why don’t we just legalize them? And just stop spending all this government money on deportations and incarcerations.

When I give lectures on this issue, I like to just point to one word: bananas. How many bananas do we eat every day in the United States? I just had one when my cereal this morning. Does the money that we spend on bananas go to Guatemala or El Salvador or Honduras, from where these immigrants are coming for asylum? No. The money that we spend on bananas goes to Chiquita or Dole — to corporations. The money never gets to the people on whose land the bananas are produced, or to the workers who do the work to bring us the bananas. This is another area where the United States of America does have to take responsibility.

We shouldn’t see our southern neighbors as people we can exploit, but as people we should support and help. Why would people want to leave their homes to come to the United States unless they were desperate and hungry and had to come here? We need to do more in terms of our foreign relations to see how we can help countries develop their resources and not think that the resources of these countries really belong to the United States.

You celebrated your 90th birthday in April. What would you like to see accomplished in this new decade?

I think that young people are the ones who are going to drag us into the 21st century and to get rid of fossil fuels, create green energy jobs and to develop an economy that will help everyone — not just a few. And I can’t say exactly how we’re going to do that, but I think that we are smart enough. We’ve got to figure out a way to do away with this brutal capitalism that we have in the United States, where you have 10 percent of the wealthy owning 90 percent of the wealth. That is wrong. We have to stop the mass incarceration of people, put more money into our educational systems and develop universal child care and universal health care. I think we can start there.