Settler Colonialism and the Second Amendment

From The Elders February 8, 2018
by Roxanne Dunbar-Ortiz

The Anglo-American settlers’ violent break from Britain in the late eighteenth century paralleled their search-and-destroy annihilation of Delaware, Cherokee, Muskogee, Seneca, Mohawk, Shawnee, and Miami, during which they slaughtered families without distinction of age or gender, and expanded the boundaries of the thirteen colonies into unceded Native territories. 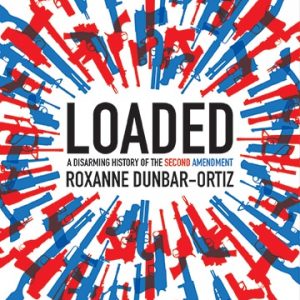 The Declaration of Independence of 1776 symbolizes the beginning of the “Indian Wars” and “westward movement” that continued across the continent for another century of unrelenting U.S. wars of conquest. That was the goal of independence, with both the seasoned Indian killers of the Revolutionary Army and white settler-rangers/militias using extreme violence against Indigenous noncombatants with the goal of total domination. These forces were met with resistance movements and confederations identified with leaders such as Buckongeahelas of the Delaware; Alexander McGillivray of the Muskogee-Creek; Little Turtle and Blue Jacket of the Miami-Shawnee alliance; Joseph Brant of the Mohawk; and Cornplanter of the Seneca; as well as the great Tecumseh and the Shawnee-led confederation in the Ohio Valley. Without their sustained resistance, the intended genocide would have been complete; the eastern half of the continent was “ethnically cleansed” of Native nations by 1850, through forced relocation to “Indian Territory” west of the Mississippi.

The program of expansion and the wars against Native American civilization and the agricultural societies of the vast valley of the Ohio River and the Great Lakes region began before the Declaration with the French and Indian War of 1754–63, which was the North American extension of the Seven Years’ War between France and Britain in Europe.1 Britain’s victory over France in 1763 led to its domination of world trade, sea power, and colonial holdings for nearly two centuries. In the Treaty of Paris, France ceded Canada and all claims east of the Mississippi to Britain. In the course of that war, Anglo-American settlers intensified their use of counterinsurgent violence, which the Anglo settler elite dubbed “savage wars,” against Indigenous peoples’ resistance to their incursions into the territories of the Ottawa, Miami, Kickapoo, and the confederations identified with Pontiac’s leadership of the Great Lakes region, spreading to the Illinois and Ohio countries. By the end of the war, significant numbers of Anglo settlers had taken Indigenous lands beyond the colonies’ boundaries, and land speculation was a road to riches for a fortunate few.