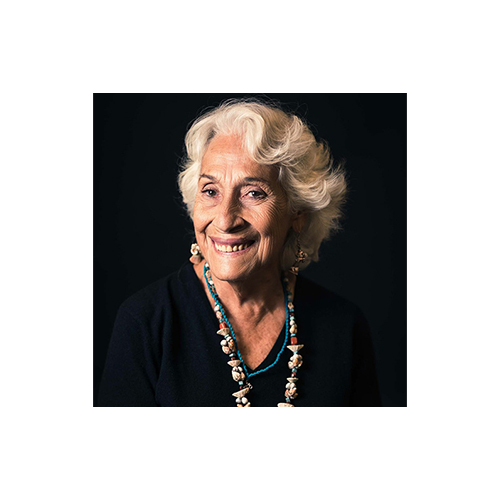 Myrna (Taíno name: Inaru Kuni- Woman of the Sacred Waters) lives on the shores of the Caribbean Sea on the tiny island of Vieques.  This paradise served as a training ground for the US Navy and for more than six decades suffered from the devastation of the health of its residents and the environment. This assault converted Myrna and many of others of Vieques to become peace-loving warriors in opposition to the US Navy’s desecration of their island.

She is the Founder of Vidas Viequenses Valen an environmental movement working for peace and justice, and a Founding member of Radio Vieques, Educational Community Radio.  She is a steering committee member of the Ceasefire Campaign and a Community representative for the Restoration Advisory Board of the US Navy and for the EPA, U. Mass project to study the effects of military toxins on Viequenses and their environment

Myrna was born in San Juan, Puerto Rico, in 1935, raised in New York City, and has lived in Vieques for half a century. She has a Master of Fine Arts from Catholic University, Washington, DC, 1959
She is the widow of Charles R. Connelly. Mother of five, Grandmother of nine, soon to be great grandmother! Artist, Activist, Abuela

She has traveled to represent the people of Vieques and advocate for their rights to Peace conferences in Okinawa, Germany, and India, and at Universities in the US including U. Connecticut, U. Michigan, and UC Davis.  She has spoken five times at The United Nations Decolonization Committee.  She has appeared in many documentaries and has testified before US Congress to present the Vieques story and advocate for the rights of her people.