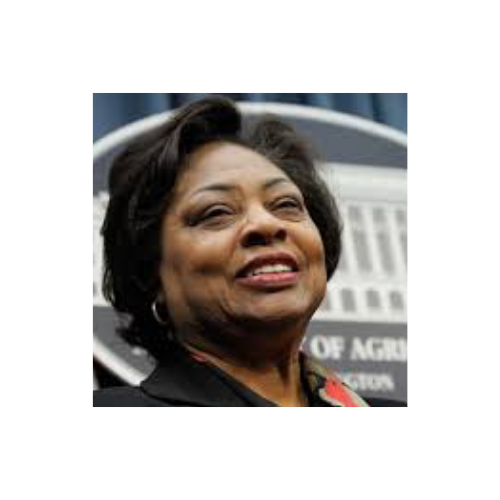 Shirley Sherrod was born in Baker County, Georgia, on November 20, 1947, to Hosea and Grace Miller. Her father was a deacon at the local Baptist church. A white farmer shot him to death, reportedly over a dispute about livestock. No charges were returned against the shooter by an all-white grand jury. The tragic murder of Shirley Sherrod’s father when she was 17-years-old had a profound impact on her and was a turning point in her life and she vowed, on the night of her father’s death, to stay in the South to work for change.

​She attended Fort Valley State College beginning in September 1965. She was there for two years and then transferred to Albany State where she received her bachelor’s degree. There she studied sociology while also working for civil rights with the Student Nonviolent Coordinating Committee (SNCC) where she met her husband, Reverend Charles Sherrod.​

During the 1960s, Sherrod and her husband founded the Southwest Georgia Project and helped to form several land trusts in Southwest Georgia, in particular, New Communities Inc., a collective farm co-founded by Sherrod in 1969. Located in Lee County, Georgia, the 6,000-acre project was the largest tract of black-owned land in the United States. It is the first Community Land Trusts in the United States, designed to provide an equitable and sustainable model of affordable housing and community development while providing African American farmers the opportunity to farm land securely and affordably. The project soon encountered difficulties in the opposition of area white farmers, who accused participants of being communists, and also from segregationist Democratic Governor Lester Maddox, who prevented development funds for the project from entering the state. A drought in the 1970s, fertilizer suppliers selling them inferior products, and their inability to get timely government loans led to the project’s ultimate demise. Sherrod went on to work with the Federation of Southern Cooperatives, to help black farmers keep their land.

In 1999, New Communities, Inc. joined the class action lawsuit against the United States Department of Agriculture because of discriminatory lending by the USDA’s Farmers Home Administration. In July 2009, after a decade, New Communities was awarded $12 million. In 2011, New Communities purchased a more than 1600 acre plantation in Albany, Georgia and has developed a detailed plan for this property.

Sherrod earned a master’s degree in Community Development from Antioch University through the Rural Development Leadership Network. The individualized master’s program allowed community activists in rural areas to continue their work for their local communities while earning their degree. The program required close coordination between the PhDs connected with Albany State and her professors at Antioch. She completed her master’s work in 1989.

Sherrod later served on the board of the Rural Development Leadership Network until she resigned from the board after accepting a position with the United States Department of Agriculture (USDA) in 2009, as the Georgia State Director of Rural Development. She was the first black person to hold that position. She became the subject of a controversy when edited remarks were used to force her to resign. However, upon review of the complete unedited video in full context, the NAACP, White House officials, and Tom Vilsack, the United States Secretary of Agriculture, apologized for the firing and Sherrod was offered a new position.

Currently, Sherrod serves as the Executive Director for the Southwest Georgia Project and as Vice President of Development for New Communities at Cypress Pond. She also serves on the boards of Rural Advancement Foundation International, Rural Development Leadership Network, and the Albany Chamber of Commerce.