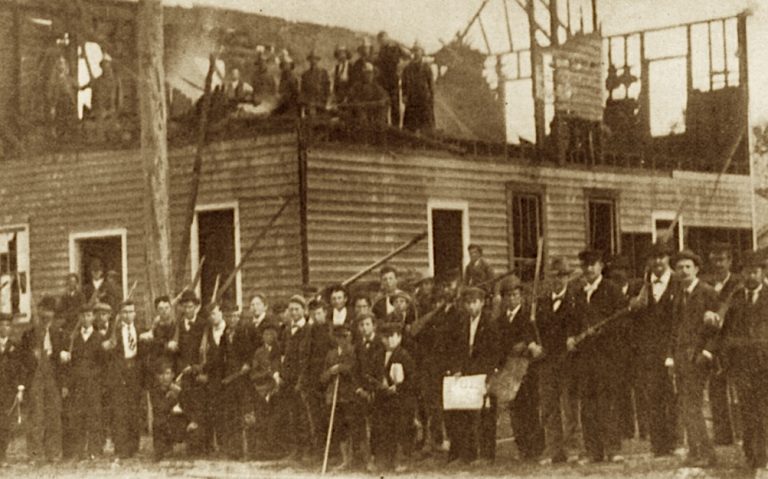 A white supremacist coup overthrew the duly elected biracial government of Wilmington, NC in 1898. Here, a group of vigilantes pose in front of the burned-out offices of The Daily Record, a Black newspaper. Photo from Wikimedia Commons.

Not a day goes by without some reminder of the pervasiveness and persistence of white supremacy in this country – whether the police murder of another unarmed Black person or a new assault on voting rights or civil liberties. “Recognizing that the U.S. is a racist white republic helps ground our understanding that the racist state plays a central role in shaping and enforcing racial capitalism and systemic racism,” Bob Wing contends. In the article that follows, he details the history behind this observation and its strategic implications for our movements’ work going forward. Over the next several weeks, Organizing Upgrade will be publishing a series of commentaries on this piece, and we invite readers to respond as well.

Far from recoiling at Trump’s failed coup of January 6, the GOP is avidly regrouping around him and launching an even more ruthless campaign of voter disenfranchisement to seize power. The polarization between racist authoritarianism and a multiracial democracy is white-hot.

There are many things that progressives need to do to win this historic fight. One of the less obvious, yet crucial, projects is to sharpen the conceptual understandings that guide our work.

For example, the Black Lives Matter movement, flanked by immigrant and Native struggles, has energized public appreciation of “systemic racism” and renewed Black-led antiracist activism. Among progressives, “racial capitalism” has won an enthusiastic audience as more people realize that U.S. capitalism and racism are inseparable.

As these concepts get popularized, we ought to deepen them and oppose the inevitable attempts to water them down, de-radicalize, divide and de-center the struggle against racism.

THE STATE AND WHITE SUPREMACY

I also believe that our movement needs to more thoroughly digest and strategically act upon the harsh reality that racism is, first and foremost, imposed by white racist political power. In particular, the fight against racism is choked if it does not target white power and its constituent political institutions, especially the institutions that embody and exercise the power of the state.

Response from Erin Heaney, national director of Showing Up for Racial Justice (SURJ)
Response from veteran social justice labor organizers Rand Wilson and Peter Olney
Response from historian Van Gosse
Response from Bill Fletcher, Jr., longtime leftist trade unionist, writer, past president of TransAfrica Forum, co-author (with Peter Agard) of “The Indispensable Ally: Black Workers and the Formation of the Congress of Industrial Organizations, 1934-1941”; the co-author (with Dr. Fernando Gapasin) of “Solidarity Divided: The crisis in organized labor and a new path toward social justice“; and the author of ‘They’re Bankrupting Us’ – And Twenty other myths about unions.”
Response from Gerald Horne, Black historian and author of dozens of books, including ‘The Dawning of the Apocalypse: The Roots of Slavery, White Supremacy, Settler Colonialism and Capitalism in the Long 16th Century‘ (Monthly Review Press, 2020) and ‘ The Counter-Revolution of 1776: Slave Resistance and the Origins of the USA’, (NYU Press, 2014).
PrevPreviousNational Civil Rights Museum Remembering MLK at their April 4th Commemoration featuring a conversation with Reverend James Lawson
NextEPISODE 6: HAS GEN Z BEEN SCARRED FOREVER BY COVID? A DISCUSSION WITH THE EXPERTS AND YOUNG PEOPLE THEMSELVESNext